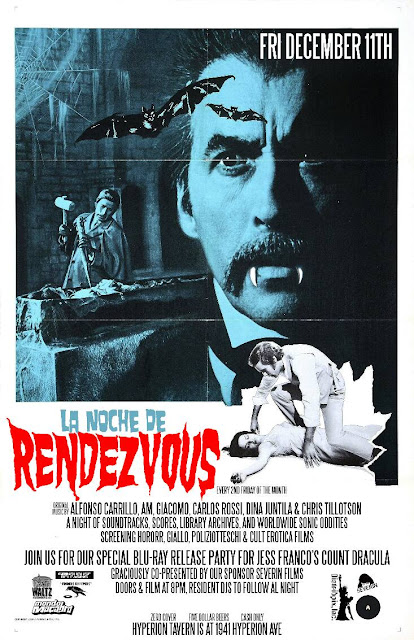 RENDEZVOUS & Severin Films are proud to present the blu-ray release party for Jess Franco's rendition of the Bram Stoker classic, COUNT DRACULA! Join us at the Hyperion Tavern in Los Angeles on Friday, December 11th for a FREE screening of COUNT DRACULA (starring Sir Christopher Lee, Soledad Miranda, and Klaus Kinski) at 8PM. In typical RENDEZVOUS fashion, we will have LOTS of surprises and exclusives on hand...all to be announced! Immediately following the film, the RENDEZVOUS crew will be spinning all sorts of soundtrack and library goodness, including selections from the COUNT DRACULA OST by Bruno Nicolai! Finally, last but DEFINITELY not least, our resident RENDEZVOUS film archivist, Jim Branscome, will be screening a specially crafted highlight reel showcasing an array of Dracula delightfulness. This will be our our last party of 2015 and we are looking forward to closing out this amazing year with a bang! See you there!! 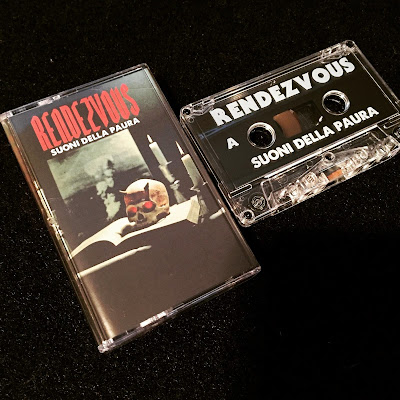 Hey there friends! Your pals at RENDEZVOUS are thrilled to announce the release of our first, professionally manufactured release! We are very proud of this one. Just in time for the Halloween season, 'Suoni della paura' will be available for purchase on Sunday, October 4th at the Frizzi 2 Fulci show at Beyond Fest. Leftovers will be sold at our next RENDEZVOUS session at the Hyperion Tavern on the 9th, and online as well. Limited to 100 worldwide. Send an email to info(at)rendezvousLA.net if you're out of the LA area and wish to order one. Cheers!
Posted by RENDEZVOUS! DJ's at 5:00 PM No comments:

Check out the RENDEZVOUS Tumblr Page! 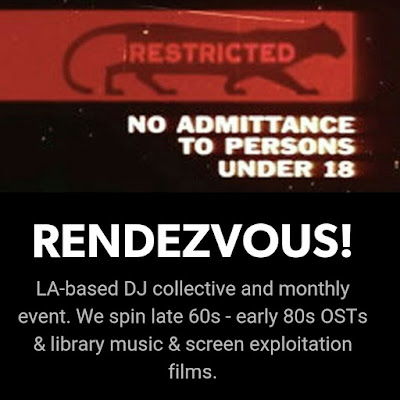 RENDEZVOUS is on Tumblr! Check us out here!
Posted by RENDEZVOUS! DJ's at 12:26 PM No comments:

We are excited to present Weird-Ass Cult B-Movies Mixtape by Angel Dust Dealers — a unique mix of excerpts from exciting scores (mostly unreleased) for cult B-movies from the 80’s, transferred directly from VHS tapes with deliciously lo-fi quality sound. The full tracklist below complete with cue-times will help you to jump to your favorite track immediately, although the thorough listening experience is highly recommended for maximum mind-submerging effect. Erase & Rewind! 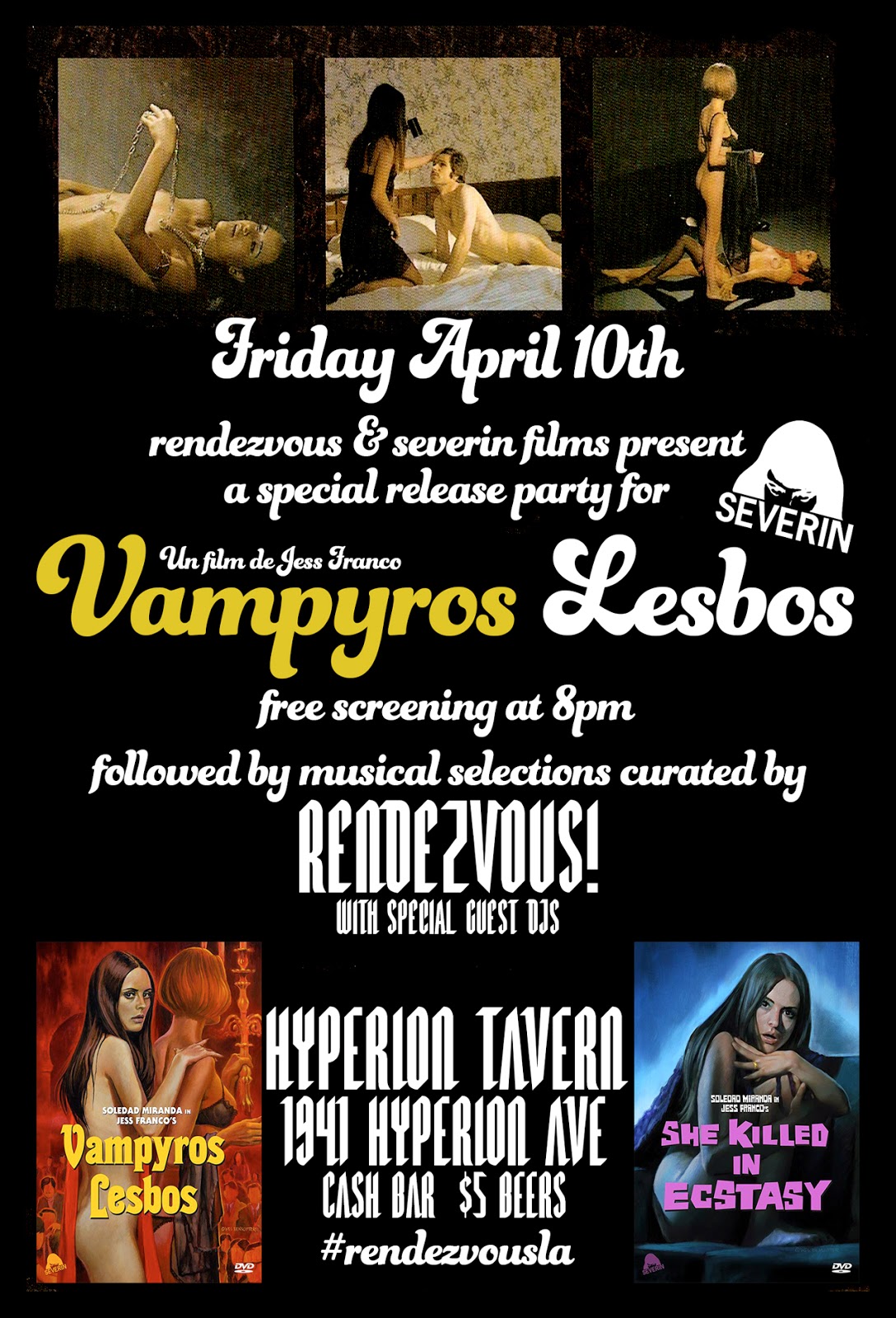 RENDEZVOUS & Severin Films are proud to present the blu-ray release party for Jess Franco's iconic cult classics, VAMPYROS LESBOS and SHE KILLED IN ECSTASY. Join us at the Hyperion Tavern in Los Angeles on Friday, April 10th for a FREE screening of VAMPYROS LESBOS (starring the lovely Ms. Soledad Miranda) at 8PM. In typical RENDEZVOUS fashion, we will have LOTS of surprises and exclusives on hand...all to be announced! Immediately following the film, we're excited to host a wonderful crew of guest DJ's...all RENDEZVOUS fam, including our pals Todd Gilchrist, Trevor Baade of Jacknife Records & Tapes, and the much-anticipated return of Heru Avenger (a.k.a. John Basil of BAAST). Finally, last but DEFINITELY not least, our resident RENDEZVOUS film archivist, Jim Branscome, will be screening a TWO and a half hour highlight reel showcasing the work of our beloved Uncle Jess. If you've yet to attend one of our parties this year, trust us when we say that you will NOT want to miss this one! 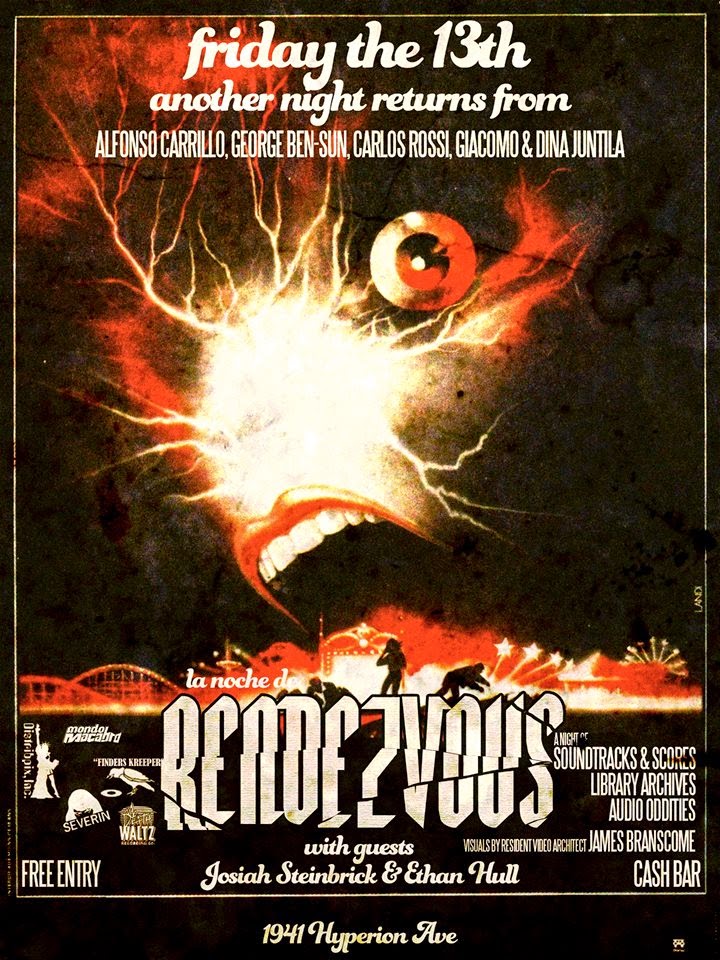 Join us next Friday, the 13th of March, for a celebration of all things video nasty! LA-based record collector Josiah Steinbrick will be making his RENDEZVOUS debut! If you follow Mr. Steinbrick on the social media, then you know that not only does he own grails galore, he also has an impeccable taste in records! We are excited to announce that our man will be spinning TWO sets! All of us here at RENDEZVOUS are terribly thrilled about this. Bring your cameras, bring your notebooks...this is definitely going to be one for the connoisseurs. And if that were not enough, our man from San Diego, Ethan Hull, returns for another session! We've been told he's got some surprises up his sleeve and we cannot wait to find out what he has in store for the evening. Oh yeah, let's not forget about the films...an INTEGRAL part of an evening at RENDEZVOUS. Word on the street is our resident film librarian, Mr. Jim Branscome, is creating another one of his famous highlight reels, this time showcasing the finest in video nasty footage. If you've been to any of our recent events, then you know what to expect - a true feast for the eyes! AND speaking of video nasties, starting next Friday, we will be selling copies of Severin Films' VIDEO NASTIES: THE DEFINITIVE GUIDE parts 1 & 2 at the bar!! We'll also have an assortment of other Severin titles for sale as well. And finally, as per usual, we will have loads of giveaways from our lovely and generous sponsors Severin Films & Death Waltz Recording Company!

RENDEZVOUS! is a DJ collective & monthly event in Los Angeles, CA. Resident DJ's Alfonso, AM, Carlos Rossi, Chris Tillotson, Ethan Hull, and Marsellus Wallace spin late 60's thru early 80's Italian horror soundtracks, library grooves, and other sonic oddities. There are also screenings of an assorted array of films, from the poliziotteschi & giallo genres, to horror and late night erotica. It all goes down on the SECOND Friday of every month at the Hyperion Tavern in Los Angeles.